The Newfoundland (affectionately: newfie) is a large dog breed beloved around the world for its gentle nature and strong working attitude.

The Newfoundland is a breed that’s been around for a bit. Exactly when and how it appeared is not entirely clear, as is the case with a lot of these older breeds. At least we know where it’s from: the island of Newfoundland off the coast of eastern Canada.

There are some theories as to the Newfoundland’s descent. It’s been speculated that the breed is a mix of bear dogs introduced by the Vikings and indigenous dog breeds. Other sources report the involvement of Tibetan Mastiffs or Great Pyrenees dogs.

Whatever the case, the Newfoundland features a long history as an excellent working breed. Fishermen in Newfoundland long used these dogs to pull loads and perform other work. They’ve also commonly been used as both land- and water based rescue dogs.

During the 1800s, Newfoundlands were popular in Great Britain, which kickstarted their spread through Europe. The First and Second World War meant numbers temporarily dwindled, but they have recovered in the years since.

Did you know? Whatever the exact origins of the Newfoundland breed, what we do know through genetic research is that they’re closely related to retrievers. 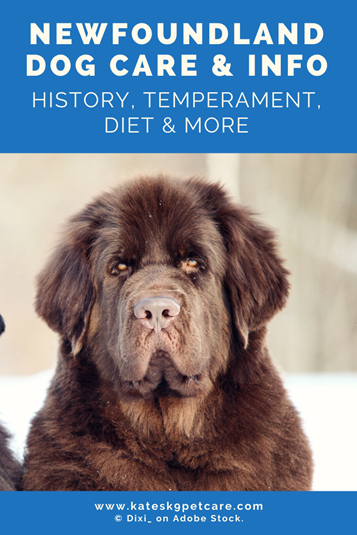 How big do Newfoundlands get?

The first thing anyone will notice about this dog breed is their sheer size. They are classified as ‘giant’ dogs, a pretty accurate description if you ask us!

Obviously size and weight vary by individual and gender. Newfoundlands can range in weight from around 120-150 pounds (55-68 kg), with the females generally being a bit lighter than the males. They tend to be around 27” (70 cm) in shoulder height.

Did you know? Some Newfoundlands vastly surpass the average height and weight for the breed. One Newfoundland from North Dakota named Boomer was reported to weigh 180 pounds (82 kg)!

If there ever was a dog breed that can be classified as a ‘gentle giant’, this would probably be it. Newfoundland dogs can be pretty intimidating because of their size, but that quickly dissipates once you get to know them.

Although they do love to play and be active, Newfoundlands are mostly known for their calm and sweet disposition. In fact, Newfies that show signs of aggression or are overly shy are generally disqualified from shows! Their gentle nature really is a core characteristic of the breed.

The above also means that this is a pretty great family dog. Obviously you should always be careful, as this huge breed doesn’t always realize its own strength, but in general you can rest assured that you can let your children play with a well-trained Newfoundland.

Keep in mind that because Newfoundlands are so social, they can have separation issues. They just love being part of the family and even for well-trained individuals, it can be difficult to be left alone for long periods of time. Make sure you have plenty of time to dedicate to your dog. 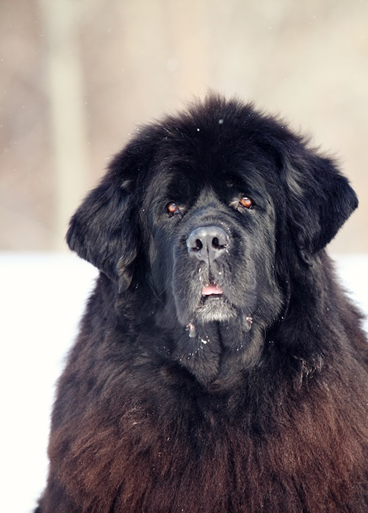 We can’t tell you exactly how much you should be feeding your Newfoundland: dietary needs vary across individuals and also depend on age, gender and health. That being said, they’re not the most active breed out there, so you don’t have to worry about going through pounds and pounds of dog food a week.

For an adult Newfoundland, at a normal activity level, you could start at 4-5 cups of high quality dry dog food a day. Don’t forget to always keep a close eye on your dog’s weight and figure. It can be a bit difficult to see whether such a fluffy breed is at a normal weight due to its thick coat, but it’s important to prevent obesity, which can really shorten your Newfoundland’s lifespan.

Not sure what and how much a Newfoundland should be eating? Contact a reputable vet and they should be able to help you figure things out.

Tip: Newfoundlands are prone to bloat, which can be a serious issue that will land you at the vet’s clinic. Try to space your dog’s meals throughout the day (2-3 meals rather than one) and make sure to avoid playtime, running and other more vigorous exercise for about an hour afterwards.

Traditionally, Newfoundlands are black. However, there are also a few other coat colors out there! You might see Newfoundlands in black, brown, grey, white and black (also referred to as ‘Landseers’), tan and more. Mixes of all these colors also occur. 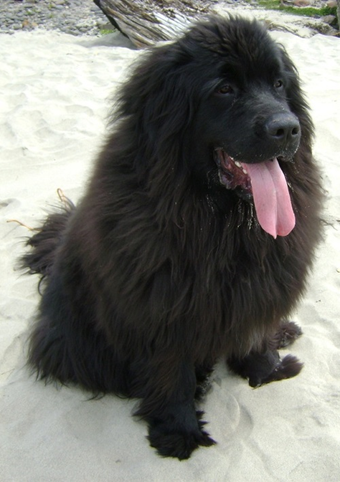 If you’re thinking about adding a Newfoundland dog to your family, you might be wondering about their shedding levels. It probably doesn’t come as a surprise that these furry creatures can be absolute shedding nightmares!

Newfoundlands have seasonal undercoats meant to keep them warm during winter, meaning that twice a year the hair goes flying. You’ll need to brush your Newfie a few times a week to keep its coat looking healthy and prevent tangles. Shedding time means even more brushing.

Keep in mind that you will likely also need to bathe your Newfoundland on a regular basis. These dogs love water, but they love mud even more. Their long coat means they can track all sorts of dirt into the house.

Lifespan of a Newfoundland dog

As with other large and ‘giant’ dog breeds, the most unfortunate characteristic of Newfies is that they don’t tend to live very long. The lifespan of a Newfoundland dog is 8-10 years, although individuals have lived to up to 15.

Like other larger dogs, Newfoundlands do suffer from some breed-specific health issues. Make sure you’re aware of these and can recognize them if you’re interested in having one!

As mentioned in the section on diet, one common problem in Newfoundlands is that they’re prone to bloat. Basically, this means that their stomachs can fill up with gas (or even food if they overeat), which they’re unable to pass. This can unfortunately be deadly, so you have to be vigilant.

Another issue you might run into is heat. Newfoundland is not exactly the toastiest location in winter, which is why these dogs were bred for their fluffy, long coats. That’s great during the colder months, but in summer, you need to be careful. Keep fans running and provide plenty of shade and water for your Newfoundland dog.

Other common health issues associated with Newfoundland dogs are:

Did you know? It’s often recommended not to let your Newfoundland puppy play too much on hard surfaces like concrete. Their bones and joints are still under construction, meaning it’s best to wait a year or two before including very strenuous exercise into your dog’s routine. 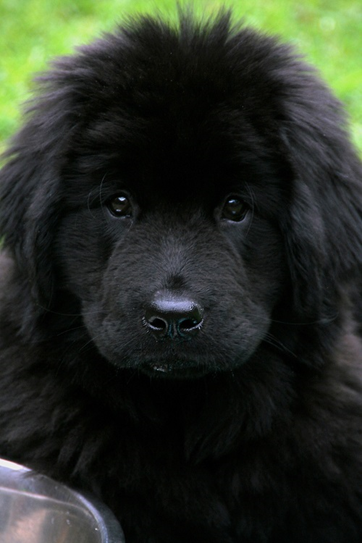 One of the most important factors in care for large dog breeds like the Newfoundland is training. Although the breed is known for its sweet disposition, this doesn’t mean you shouldn’t spend plenty of time training yours.

Training for your Newfie should begin in the puppy stage. Keep your pup’s smart brain busy with socialization, tricks or even training for working purposes. This helps make sure unwanted behaviors won’t pop up later: separation anxiety, shyness, aggression, excessive chewing or even overly rambunctious play can often be prevented with proper training.

Tip: Don’t forget proper leash training. If there’s one breed you don’t want to have pulling at their leash it’s this one, as a good tug is likely to send you flying.

Unless you’re rescuing, it’s important to get your Newfoundland dog or puppy from a reputable breeder. Because they’re so prone to health issues, you’ll want to find a registered breeder to get the best chances of finding a healthy dog.

Newfoundlands are not cheap dogs to buy. Although prices vary by region, you’ll almost certainly be paying more than $1,000. And don’t forget that the starting cost is definitely not all. Big dogs mean big dog beds, lots of sturdy toys, replacing chewed up items (it will happen even with proper training), obedience classes, accessories, vet bills, high-quality food… make sure you have the funds before you consider adding any dog, and especially such a large one, to your family.

If you’re interested in Newfoundlands, we hope you’re not too much of a neat freak. We already discussed the shedding, and we’re not even going to start about the dirt and mud.

Aside from those issues, there’s the drool. There’s just no way to prevent it aside from carrying an XL handkerchief whenever your Newfie is close. One shake of the head can send drops of slobber flying everywhere!

As mentioned before, Newfoundlands are originally working dogs. Although they were often used to pull heavy loads, their real specialism is water. They even have webbed feet to make swimming easier! Newfoundlands are widely known for their ability to pull drowning victims out of the water, even if it’s freezing.

Although you might not be interested in training your Newfoundland to be a water rescue dog, that doesn’t mean you can’t put your pup to work. Not even necessarily because you need help, but just because it makes them happy! They can carry items and may also do well as guard dogs or even therapy dogs.

It’s common to wonder how to tackle the issue of a new baby if you have a dog, or adopting a dog if you already have a small child to watch out for.

As we’ve discussed, Newfoundlands are exceptionally friendly and a well-trained Newfie makes a great family pet. They’re even historically referred to as nanny dogs! That being said, their size can be an issue.

It can already be difficult when your 140-pound Newfoundland thinks it’s necessary to get on top of an adult for snuggle time, but these inconveniences can quickly become dangerous when it comes to babies or small children. At the very least, keep an extremely close eye on your Newfie if you decide to let the dog around kids.

If you’re looking for a large, calm and affectionate dog and can provide the space needed for one, a Newfoundland might be for you. Just make sure you’ll be able to spend plenty of time with your pup! Proper training is crucial and health issues do pop up, so this might not be the ideal breed for first time dog owners.